This page seeks to provide a brief summary of the history of the Southern African Association of Jungian Analysts (SAAJA). The purpose of this overview is to provide information about the roots and developments within SAAJA to individuals who are new to the organization. A more comprehensive description of the history of the organization is in the process of being compiled, and this will eventually provide more detail and context to the facts described below. 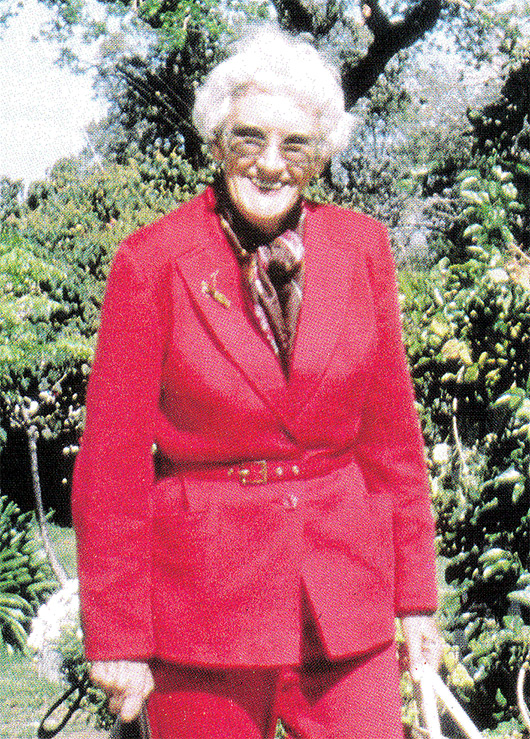 Dr. Vera Bührmann (left) was the only Jungian analyst in South Africa for 40 years. She studied medicine at UCT and then she specialized in psychiatry in London where she qualified as a Jungian analyst. She subsequently lectured in the Department of psychiatry at UCT and worked for many years at the Child and Family Unit. Her deep commitment to Analytical Psychology, coupled with her commitment to South Africa, motivated her to initiate a Jungian training in SA. One of Vera’s hopes with the training was to establish a discourse between traditional healers and Western psychology, particularly Jungian psychology. She had initiated this exploration and written of her experiences and reflections in her book, Living in Two Worlds.

The formal inauguration of the Centre represented the amalgamation of at least three interconnected movements concerned with the application of Jungian thought in a South African context:

These three movements began to flow together formally for the first time at a conference held at the Hohenhort Hotel in Cape Town in 1984. The theme of the conference concerned, primarily, the relevance of Jungian theory to the concept of 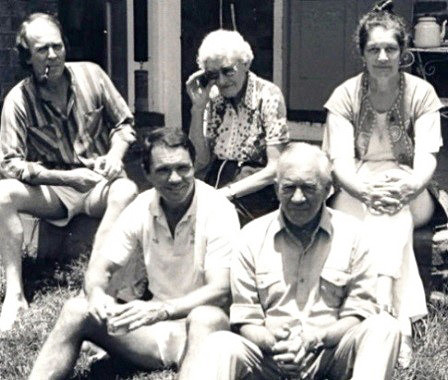 Wilderness and nature conservation. A roundtable meeting took place at the end of the conference and the possibility of amalgamating the contributions of the three streams within the context of a single Centre was conceived. This meeting led to the inauguration of the Cape of Good Hope Centre for Jungian Studies, in Burnera in the Drakensberg in January 1987.

The following people were present at this meeting (from left to right in the photo): Graham Saayman, Vera Buhrmann, Gloria Gearing, Ian McCallum and Ian Player.

1987: Conception of Cape of Good Hope Centre for Jungian Studies

The following people were on the various committees of the Cape of Good Hope Centre for Jungian Studies:

1987: Selection of the first group of candidates

In Spring 1988, the first Mantis journal was published. Initially it took the form of a newsletter. Over the years, this Mantis newsletter has evolved into a journal, containing the publications of both visiting analysts from abroad, SAAJA members and other professionals in related fields. Mantis Journal is published once or twice a year

Laurens van der Post (right) created a support foundation in America together with a group of five others. When Laurens’s support group agreed to finance two resident analysts for a minimum of three years to support the work of Vera Bührmann and Joan Anderson, as well as to support the block-training programme, they made it possible for the Centre to take root.

Analysts who offered to teach in a four-week module system:

1989: Julian David – Early in 1989 Laurens’s foundation brought Julian David (see picture right) from London to the Cape and provided analysis for all the candidates in training at the time. He stayed for four years, assisting Vera and the other resident analysts in seeing the first group of candidates through to qualification, and then returned to England. For many years he continued to come to South Africa annually for two to three months to offer teaching and Public Programme lectures.

1990: Three more analysts came to South Africa to assist Vera and Julian in the training. Together these analysts took on the work of training new candidates, offering seminars while also providing both analysis and supervision. They were: 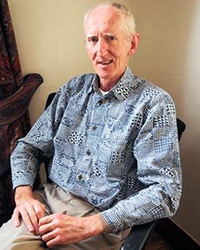 Patrick Tummon: Zurich-trained, Patrick Tummon was likewise sponsored by Laurens’s foundation. Patrick served on Exco and the Library Committee for many years, contributing generously of his time and energy. 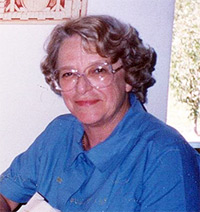 Dr. Gerwin Davis: was an ex- South African working in London. She returned from London (where she did her training as an analyst) in 1990, and stayed on until 1999/2000. She was co-president for the first six months of SAAJA’s existence. 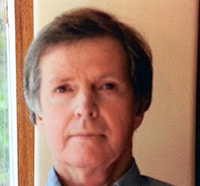 Dr. Peter Reid: San Francisco-trained and originally from South Africa, Peter Reid (see photo right) returned to Cape Town to assist with the training. Peter has served on several SAAJA committees through the years, also giving generously of his time and energy.

2000: Ursula Ulmer: Zurich-trained, Ursula moved from Switzerland to Cape Town and volunteered for LifeLine, offering training and supervision to HIV-counsellors in Cape Town and Khayalitsha. She later helped establish Etafeni, a community center in Nyanga dedicated to supporting children infected and affected by HIV. Ursula became a member of SAAJA, taught and supervised candidates, and served on the Curriculum Committee of SAAJA. She returned to Zurich in 2008. 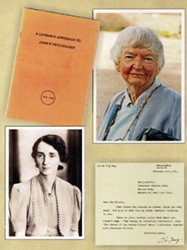 1988: Establishment of the Library

Since the C. G. Jung Library’s inception in 1988, our Honorary Librarian has been Jean Albert . Jean nurtured and encouraged the development of SAAJA’s Library from its infancy to its current maturity as one of the best stocked libraries of its kind on the African continent. Unfortunately, Jean who has been instrumental in making this Library what it is today over the past twenty years, has had to resign from the Library Committee due to ill health. In acknowledgement of the enormous contribution Jean has made to the success of our library over these many years, membership decided to honour her by naming the Library the Jean Albert Library. Sadly Jean passed away in August 2020. Her memory is honoured by SAAJA and many others who knew her, who contributed their memories to our obituary page.

In 1991, an anonymous donor made possible the purchase of a house as a permanent home for the C.G. Jung Centre on Linray Road in Rosebank. Laurens van der Post formally opened the building on 29 October 1991, and planted a Ginkgo Biloba tree in the garden to commemorate the auspicious occasion.

In March 1992, Dr. Thomas Kirsch visited South Africa, and assessed the first group of candidates for final qualification. Eight candidates of the first 13 applied, and at the IAAP conference in Chicago in August of the same year, they were accepted as IAAP members. They were: Carole Abramovitz, Rod Anderson, Dr. Astrid Berg, Stephen Bloch, Dr. Bruce Lakie, Renee Ramsden, Dr. David Trappler and Gerald Stonestreet. Along with the other already qualified analysts, Dr. Joan Anderson, Dr. Vera Bührmann, Julian David, Dr. Gerwin Davis, Dr. Peter Reid and Patrick Tummon the Southern African Association of Jungian Analysts (SAAJA) was formed. Over the next two years this group of 14 analysts created the formal structures of the new organisation. (See the SAAJA constitution, and ethics document.)

Brief overview of developments in SAAJA

The period from 1992 – 1994 was a transitional period, prior to SAAJA being granted training status by the IAAP, therefore assistance from overseas visitors for selection of new candidates was still required. In May 1992, Dr. J Groesbeek came to South Africa to assess potential candidates for acceptance into the new training programme. At this time six candidates were selected – Lyn Adamson (Cook), Ian Donald, Dr. Peter Hodson, Dr. Tony Kelly, Dr. Gill Mudie, Fernand Schaub.

Dr. Avi Bauman and Dr. Mara Sidoli were visiting analysts who offered workshops and lectures to professionals and the public.

Third President of SAAJA: Dr Astrid Berg. Astrid was also a member of the IAAP Executive Committee from 1998 to 2007 and served as Vice President for the last three years of her term during which she was also chair of the Academic Sub-Committee.

Dr. John Gosling, who was originally from South Africa but who relocated to New York in 1982 and trained at the C.G. Jung Institute of New York, returned to settle in Cape Town.

The XVII International Congress for Analytical Psychology was held in Cape Town.

Marian Campbell and Dain Peters commenced their training and joined the existing group of candidates.

Distance Training Programme Initiated
In 2010, SAAJA decided to embark on a distance training programme, an innovative new training programme that allowed those not resident in Cape Town to participate in the training. The programme attracted a sizeable group of candidates – Fiona Geddes, Lindy Greyvenstein, Marita de Wet, Dr. Loura Griessel, Alan Fourie, Gary Read, Jolita Jansen van Rensenburg, and Dr. Pauline Close – most of whom are currently in the last stages of their training. Lindy unfortunately had to resign from the programme due to health reasons.

The first year of Fred Borchardt’s presidency focused on how to step into the technology age, and how to stay relevant in the post-colonial world of social media.

This was a year of coming of age: SAAJA moved from its origins as a small informal group, into a publicly-recognized organization.

This was the year our organizational calendar changed to correspond with the financial year. For the first time, the AGM was held in May, rather than November.

This year also saw a continued focus on three major organizational challenges: 1) To fulfill our regulatory obligations as an NPO; 2) To meet the increased administrative workload, including the provision of CPD points to attendees of our events; and 3) To become and remain relevant in modern South Africa.

2020 was overshadowed by the Covid pandemic. As a result, the AGM was postponed to June.

Fred Borchardt completed his term as president and Ester Haumann assumed the position of president of SAAJA.

Relationships to other organizations

When SAAJA was constituted in 1992 it became a member group of IAAP. According to the IAAP constitution, the eight positions on the Executive Committee (EC) for each three year administrative term are filled by group members who are elected by IAAP Membership at the tri-annual IAAP conference. In 1998 SAAJA was elected for this position and re-elected in 2001 for a second term. The representative from SAAJA for these two terms was Astrid Berg. At the end of her two terms as representative, she was elected for a further term as one of the two Vice-Presidents of the IAAP in 2004. She was responsible for the organization of the 17th World Congress of the IAAP which was held in Cape Town in August 2007. In 2010 and 2013 SAAJA was once again elected to serve on the EC, the representative for these two terms was Fred Borchardt.

The SAPC was launched on 22nd November 2009. SAAJA was an integral part of this Confederation from its beginnings, first represented by Astrid Berg, followed by Dain Peters and subsequently an additional member, Fred Borchardt.

Interest in Jung in Gauteng was initiated by Mario Schiess (who died in 1998, in photo left) in the 1980’s and 1990’s. He was a playwright and friend of Ian Player, with a deep commitment to Wilderness experiences. He promoted Jung through dream workshops, television and radio programmes in collaboration with Peter Ammann. From this impetus grew the Gauteng Developing Group, assisted by Helmut von Schach, and nurtured by Elizabeth Martiny, a Zurich-trained analyst who has been resident in Gauteng since 1995. This group officially was given Developing Group (DG) status by the IAAP in 1999. In mid-1998 Fernand Schaub moved to Gauteng, where he lived and worked for the next 12 years, after which he returned to Cape Town. In 2013, Dr Suzan Hojdar, who had been a member of the DG for many years, qualified as a Jungian analyst via IAAP’s Individual Router Programme. That same year, with SAAJA’s distance training programme having been established in 2010, the IAAP withdrew the Individual Router programme from South Africa. SAAJA then became the umbrella body for further development of the study of Jung in Gauteng. Since 2014 the DG has become the Gauteng Associate Professional Membership (of SAAJA) Group (GAPMG). A training programme for this group of interested professionals was worked out by the GAPMG in liaison with SAAJA.